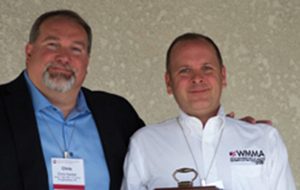 The Wood Machinery Manufacturers of America (Wmma), the national trade association for those who make machinery, cutting tools and supplies for the woodworking industry, has announced the winner of its Ralph B. Baldwin Award, the association’s highest honor. The award was presented to Jamison Scott, past president of the Association. Announcement of the award was made at the Woodworking Industry Conference (WIC), which took place at the Omni Rancho Las Palmas in Rancho Mirage, California.
Scott, who serves as executive vice president of Air Handling Systems, a third generation family-owned business in Woodbridge, Connecticut, has a long history of service to the Association and to the industry as a whole.As a fierce advocate for Connecticut industry, Scott is in constant communication with Washington, DC and Hartford, CT elected representatives on behalf of Air Handling Systems and manufacturers across the state of Connecticut and the nation. Currently Scott is working on a federal bill he helped co-create and name called the MRA (Manufacturing Reinvestment Account) which resembles an IRA for manufacturers. In addition he has presented numerous combustible dust seminars throughout North America including trade fairs and conferences such as Awfs, Iwf, Wms, Nwfa and regularly acts as a technical resource. Within Wmma, Scott has long been an active volunteer, serving in multiple roles including Membership Development Committee, Public Policy Committee, various task forces and ultimately on the board of directors, were he eventually became a member of the Executive Committee, then treasurer, vice president and eventually president. He is currently the Association’s immediate past president. The Baldwin Award is named for Ralph B. Baldwin, long-time member and past president of Wmma. During his career with Oliver Machinery Company and his involvement with the Wmma, Baldwin exemplified the commitment that makes an Association function at its peak potential. The award recognizes those who have contributed similar levels of involvement.

This site uses Akismet to reduce spam. Learn how your comment data is processed.