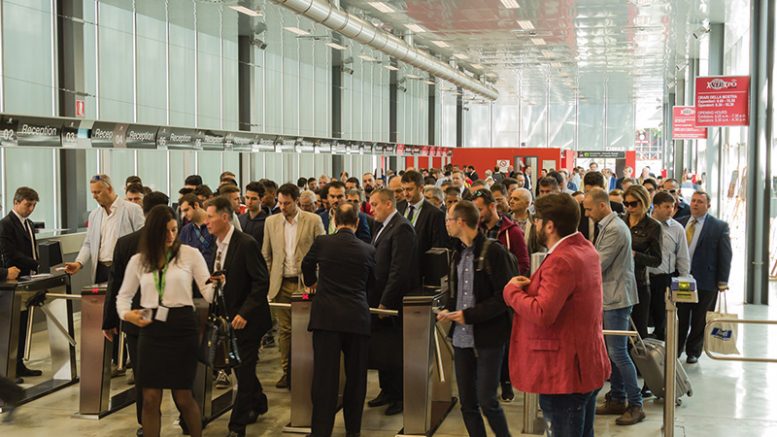 An excellent edition is expected for the international biennial event, thanks to the sharp change of economic trends and widespread “community of intent” inside Acimall. We talked about it with Lorenzo Primultini.

Lorenzo Primultini is the president of Acimall, the association of Italian woodworking machinery manufacturers. Having renewed his term in early July, he is looking forward to another period of three years to continue the renovation process undertaken not only inside the association, but also for its most important and recognized creature. Of course, we are talking about Xylexpo, the international exhibition celebrating its fiftieth anniversary this year, in a much more positive climate than in the recent past.
We had an all-round talk to sum up the situation after the summer break in view of the new “schoolyear”!

Mr. President, what do you think? Shall we start with Xylexpo?

“I’ll be glad to! Xylexpo is definitely one of our core activities, as it generates – we should never forget it – the necessary resources to support the key mission of our association, namely the promotion of “made in Italy” around the world. It is actually a pillar of made-in-Italy production! Our event is a global reference date, not only for visitors who traditionally travel to Milan, but also for the international exhibitors that present their offer side by side with Italian companies. In fifty years and more, we have interpreted– like any other exhibition in the world – our role of “reference showcase for the Italian industry”, knowing that no trade fair can be successful unless the entire world offer is on display”.

The exhibition has been going through hard times…

“…just like the Italian market: we perfectly know that exhibitions are an expression of the market where they take place. But let me say that the previous edition had already taken new routes, everyone recognized that the trend had changed. The virtuous circle had already started in 2014, when the first signs of increasing propensity to invest by technology users was combined with the long-awaited decision by Biesse and Cefla groups to come back to Milan. It was a good edition, with a significant increase in the number of visitors compared to the “horrible” event in 2012. It was clear that Xylexpo was still playing a significant role and I believe it helped bring Scm Group back to our show in 2016.

And when you work together, when you commit to seize any opportunity offered by the market, you achieve results… But let’s look ahead, at the next Xylexpo 2018: space allotment is in full swing and we are designing the “collaterals” of the event, facing eight months that will be very intensive, because we want this trend not only to continue, but to become stronger.

We already have some clear hints about exhibitors: until September 30, exhibition area demand was much higher than on the same date two years ago. Such growth is mostly driven by “big brands”, but there are also many small and medium businesses which have submitted applications for larger booths.

This trend is also supported by the overall economic situation, especially in our industry, where the weather is really fine: the Italian market is interested in instrumental goods and in wood technology, and this is attracting all technology vendors.

After a decade of “uncertainties”, when investments in equipment and production processes was cut to a minimum, now it is essential to update “machine fleets”.

This situation combines with the impact of incentives by the Italian government, which generate a multiplication effect. I am referring to the “Sabatini Act”, which offers facilitations for interest rates on loans for technology purchase, and “Super amortization”, introduced in 2016 and repeated in 2017, allowing companies to amortize 140 percent of the value of purchased goods. Last but not least – though mainly focused on large companies and the high end of the market – “Hyper amortization” is an initiative in the area of “Industry 4.0”, bringing the amortization rate up to 250 percent of the equipment value, provided it’s connected/networked technology, and in general, solutions for an industry that is no longer based on “making” things, but on the integrated management of an information flow, on the dialog with the entire value chain, inside and outside the company”.

These measures are obviously bringing benefits to manufacturers…

“Yes, and not only to Italian ones, that’s good for everyone, and I assure you that these measures are well known to manufacturers all over the world, they have understood the relevance of these initiatives. It’s an additional boost for Xylexpo, which is going to be the showcase of a more fertile landscape!

Back to the exhibition, we can say that big German groups have already submitted their participation form, requesting larger booths than in the past edition. And you can add the comeback of companies that in the past few years had decided to watch the Italian market from a distance, and also Xylexpo…

Germany is increasing its focus on Italy, but German manufacturers have always supported Xylexpo, I must say, recognizing its role of reference event for the Italian and Mediterranean market. They have remained with us, both companies and industry associations: as a matter of fact, at the end of November, we have been invited by our German equivalent Vdma to present our exhibition at an event for the wood industry, and we will certainly exchange their courtesy”.

Mr. President, you sound quite optimistic…

“Objectively optimistic: Xylexpo has a clear approach, which distinguishes it from other exhibitions held earlier during the year. Our peculiarities are dictated not by our strategies, but rather by market trends and demand, which have encouraged us to create an event with a focus on technology and solutions for secondary processing, we are really “specialists”.

Believe me: this is not the best option for me, as my company deals with log and sawmill equipment, but I will be at Xylexpo, because I have the possibility to meet my customers who will certainly come to Milan.

The exhibition is coming back in full swing, and let me add that we expect excellent results also in terms of visitors from all over the world. Xylexpo has always been a big attraction for international operators, with an international share around 30 percent, even in the most critical editions”.

“Here’s another preview for Xylon International readers – Primultini anticipates –: as applications are exceeding our expectations, we are considering the opportunity of adding more space, as few months before the official opening we might not be able to accept applications or to manage space allotment efficiently, according to criteria that provide for an easy and profitable visit.

In 2016 we had decided to condensate the entire review in three halls, occupying every single inch: if registrations maintain the current trend and space demand continues at the current rate, we will have to make a decision very early”.

“Until then we are working at “collateral” initiatives: we are planning a rich communication campaign and a “road-show” that has already touched Poznan during Drema and Brno (WoodTec), then we are moving on to Wms in Toronto and Woodex in Moscow.

We will organize the traditional international press conference in January and we are designing a number of initiatives inside the trade fair, including our XIA-Xylexpo Innovation Award, some speeches about the “culture of wood” and the comeback of “Xylexpo Arena”, an initiative we launched in 2010 and that a few companies are asking to bring back next year”.

So, a successful Xylexpo in a positive period for the industry…

“You can say to, with a touch of enthusiasm. This is definitely a peaceful period for the reasons I mentioned, a season of open and proactive collaboration also inside Acimall, our association. The new board, with Scm Group’s Luigi De Vito and Biesse Group’s Raphael Prati as vice presidents, is the mirror of an industry where small, medium and big companies strive share the same mission, namely the success of “made in Italy”. The board is representative, strong, able to promote topics and to support requests that might be critical for a strategic sector of the Italian industry of instrumental goods”.

“Talking about the board – Primultini adds – I cannot forget a painful event for all of us, the passing of Giampiero Mauri. More than others, he always believed in the association, and never with a “comfortable” or pleasing attitude, but expressing his views with strength and determination. He remained in the board as our association went through radical changes, supported by a large portion of member companies for his integrity and his determination to act and to take real measures to support an industry where he was a starring character”.