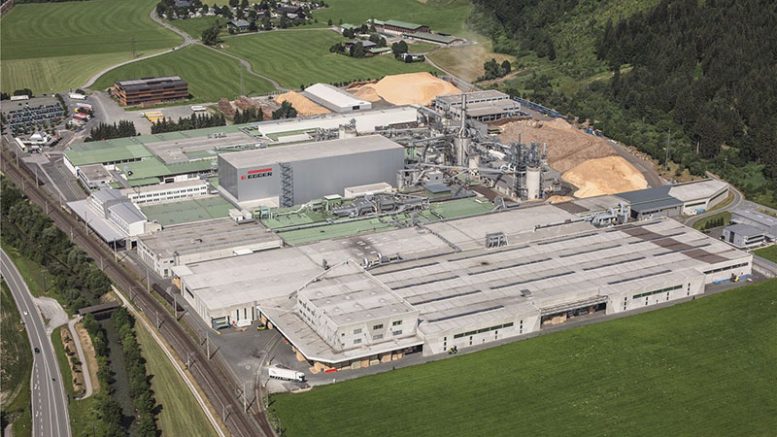 The Egger Group, headquartered in St. Johann in Tirol (AT), was able to conclude the first half-year of its financial year 2017/2018 (reference day 31st October 2017) with a consolidated turnover of Eur 1.32 billion (plus 11.1 percent compared to the previous year). The result before interest, taxes and depreciation (Ebitda) increased to Eur 222.5 million (plus 17.4 percent). The Ebitda margin increased to 16.8 percent (previous year: 15.9 percent). The Egger Group now has more than 9,000 employees and finds itself in a growth phase. It expects a positive development for the full financial year 2017/2018.

Over the past half-year, the Egger Group was able to profit from the largely positive economic situation and the growing building and renovation activities. The company managed to increase its turnover in Europe and all relevant geographic markets, as well as in all product segments. The largest turnover increases (plus 11.0 percent) were recorded for Egger Decorative Products, which sells products for furniture and interior design. The largest development of this segment, with 76 percent of all sales, was in Central and Eastern Europe. The successful worldwide introduction of the Egger Decorative Collection 2017-2019 had a particularly positive effect on the Decorative Products segment. Minor losses due to the exchange rate were recorded only in the UK. The Overseas segment grew significantly, particularly in Asia and North America. The turnover of the new plant in Concordia, Argentina, which joined the Group on 1st October 2017, are also included.

Egger Flooring Products (Laminate, Comfort and Design flooring) achieved an increase in turnover of plus 6.4 percent, as compared to the same period during the previous year despite a still difficult market environment. The overall increase in the turnover primarily depends on the gradual marketing of the new flooring capacities in the Gagarin (RU) plant. However, the Ebitda development was negative, due to the incomplete utilisation of capacities, as well as increased costs for wood and chemicals.

Egger Building Products also achieved a turnover increase of  plus 9.2 percent in a market marked by increasing raw material costs and availability bottlenecks. The sales of Osb products and of timber also increased. The largest growth in the OSB segment was recorded in Eastern Europe. On the other hand, timber sales increased in Germany and certain overseas markets. In this segment the Ebitda is also under the level of the previous year, which is again due to the increase in raw material costs for wood and chemicals.

Positive outlook for the second half-year
The Egger Group is also expecting a stable development of its business activity for the second half of the financial year 2017/2018. Given the positive situation in Western Europe, the new plant in Argentina, and the strategic move of volume from weaker regions to alternative markets, Egger is expecting to increase turnover and maintain stable results throughout the Group for the financial year 2017/2018.
Egger’s current efforts outside Europe also mean market diversification and a secure future for the entire Egger Group, its customers and its employees. Thomas Leissing, spokesman of the Egger Group Management, commented: “We are pursue a conservative growth strategy, commit to moderation, and make sure that every step the organisation makes is viable. A solid financial basis supports long-term supply relationships with customers and suppliers, as well as further stable growth based on our own performance”.