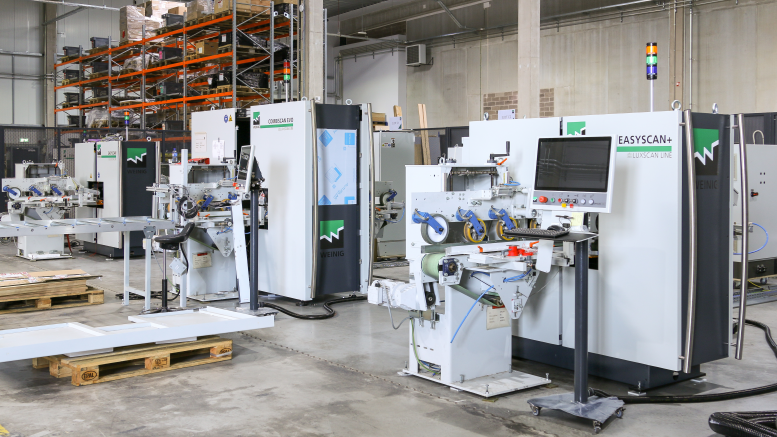 Luxscan Technologies, the leading specialist for automated timber optimizing, celebrates its 20th anniversary. Originating from a small start up, the company has grown continuously since 1998. Today, Luxscan has a scanner program for all performance requirements and all investment volumes. This also includes systems for strength grading.
The anniversary event took place among the staff and invited guests. Among them were Weinig Ceo Wolfgang Pöschl and Cfo Gerald Schmidt. Their special congratulations went to Luxscan Managing Director Raphaël Vogrig, who founded the company and played a decisive role in its success. Raphaël Vogrig and Jean-Philippe Hildebrand have held dual leadership positions at Luxscan for several years. The two managing directors took the opportunity to thank the employees for their great commitment. Supported by the commitment of the team, the company looks at a strong track record after 20 years of market presence: By the end of 2018, Luxscan will have sold 400 scanners for use in a total of 36 countries.
A video reviewed the steep development of the company: Already with the first scanner sale to New Zealand, Luxscan gained an international foothold. Soon installations followed in Germany and other European countries such as Hungary and Austria. Encouraged by good sales figures in Canada and the Usa, they decided in 2005 to found Luxscan Inc. and established their own company presence in North America, currently the most important market for the scanner specialist. In 2007 Luxscan became a member of the Weinig Group, the leading technology provider in solid wood and panel processing. This step accelerated the further expansion. Initially, the company focused on scanners for the recognition of various wood characteristics during cross-cutting. In 2008 the first rip scanner was introduced. With the completely redesigned “CombiScan+” Luxscan set a particularly remarkable milestone at Ligna 2009. The advanced technology made it possible to detect defects even more precisely, to take more criteria into account and also to grade them according to defined qualities. Due to its high performance and good integration into cutting systems, the “CombiScan+” had a significant influence on market penetration. The “EasyScan” finally meant the successful expansion of the portfolio to the entry-level segment in 2012. The enhanced “EasyScan+” model set standards also in the medium range from 2015. Luxscan was now in the position to cover requirements on every level. This brought a further growth spurt: “Thanks to our comprehensive portfolio, we have achieved a significant increase in sales in the last two years,” says a delighted Jean-Philippe Hildebrand.
Meanwhile Luxscan employs more than 50 people. Special attention is paid to innovation and customer orientation. Accordingly, the R&D department is one of the two largest teams. The service is most strongly positioned, with 18 people in eleven languages taking care of customers’ concerns.