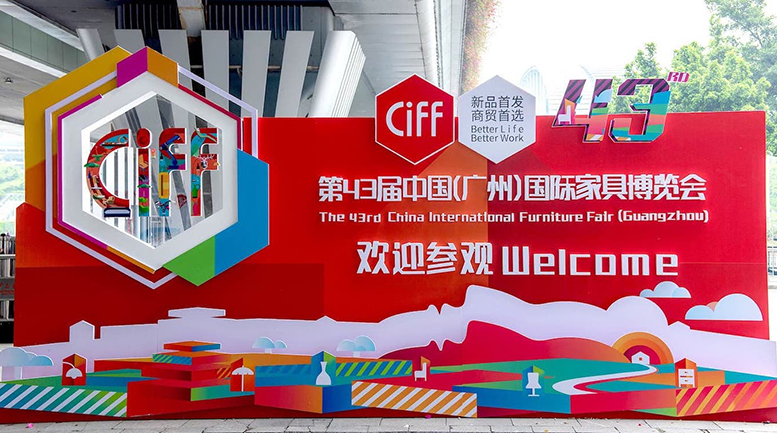 A huge exhibition, a real “storm” of events that also present technologies and supplies for the wood and furniture industry.

It seems that the 4rd edition of Ciff has turned the tables. First of all, we remind everybody that this big showcase of furniture – which also includes semifinished materials and machinery – must be held in two rounds to make room for everyone: the first from 18 to 21 March for home furniture, the second from 28 to 31 March for office furniture. We visited the “second leg”, as that’s the session with the products that are “closer” to us.

And don’t forget that this exhibition is held twice a year, more or less with the same product categories: after the March event we are reporting here, there is another edition in Shanghai in September.

All of this to say that we are talking about a real exhibition giant: the two March sessions covered 760 thousand square meters, hosting 4,344 exhibitors that were very busy with 297,759 registered visitors. All figures have improved, with an amazing increase of visitors, according to what we were told. Don’t ask more, because the only problem with this exhibition is getting detailed information. But maybe, let’s be frank, nobody cares, because business opportunities here are huge, the crowd is huge, the context maybe a bit confusing, but definitely effective. So, the table is rich, but not everyone is interested in having a 14-piece set of cutlery.

It’s a very nice exhibition, especially for the “furniture section”, definitely more charming and glamorous than the areas dedicated to components and technology, with accurate stands and products that cannot be associated to the traditional image of China: quality, design, organization, search for destinations outside Asia are the keywords. It seems that, in the Canton aisles, quite a few companies sign orders amounting to 60 percent of their revenues or that receive orders filling up 500 containers in just two days. Yes, 500, no mistake.

Guangzhou – or Canton, as it used to be – reaffirmed its role of most successful exhibition place in China e probably across Asia: this is true for office furniture, as well as for home furniture, machinery and components. We talked with Fabrizio Todeschini, for many years now the worldwide communication consultant of the exhibition and an expert of “Chinese matters”: “The reference events for office furniture in the world are three: Orgatec in Cologne, Germany, Neocon in Chicago, US, and Ciff in Guangzhou, basically one in each continent. The Chinese have conquered this place in the sun with a modern, powerful, competitive industry, whose growth was driven by the orders from big American groups: now they have become independent, achieving revenues above half a billion euro. Their “power” is witnessed by the absence of foreign competitors, while in the home furniture section, made-in-Italy and made-in-Europe creations still have much space, although Chinese companies are making giant steps”.

Back to the grandeur for a while, here’s an impressive figure: although the China Import & Export Fair Complex is one of the largest in the world, Ciff had to look for more space outside its gates, adding as many as six “external” halls for the first session dedicated to home furniture and two for the office furniture event…

ABOUT US
This wonderful parade also included “our world”, hidden behind the name Cifm/Interzum Guangzhou that embraces all the world of supplies, the rich and increasingly attractive Chinese production that literally overwhelms the international offer presented by Interzum Guangzhou, one of the “branches” of the Cologne event.

At the opposite end of the fairgrounds, three halls dedicated to technologies, a business – together with semifinished materials – that according to the organizers gathers some 1,500 companies, 25 percent from abroad, over a surface of 150 thousand square meters.

Large areas, including a significant number of producers of mattresses and upholstered furniture, but definitely a rich display, with highlights represented by the “usual” brands, side by side with an expanding community of Chinese players to prove that the Chinese industry is second to none.

One more interesting figure: a good portion of the Chinese furniture industry is investing in Industry 4.0 plants. We noticed this in the booths of Italian companies and all leading European vendors, Germany first, but also an amazing number of Chinese exibitors. After all, they told us that the Chinese robot industry is growing fast and its turnover is expected to increase by as much as 40 percent in 2019.

We saw made-in-China lines with six, seven robots integrated in smart and complex flows. Don’t they have the same reliability, continuity and volumes as others? Maybe, but the first time we visited an exhibition in China, let’s say a couple of years ago, we only seemed to see “basic” machines for primary operations. Six months later we notice well-made edgebanding machines, and six months later machining centers that did not really look so bad. Last March the bar seemed to have raised again and we can talk about “smart factory”. Not true for everyone? Yes, of course. Just like in Italy or Germany.