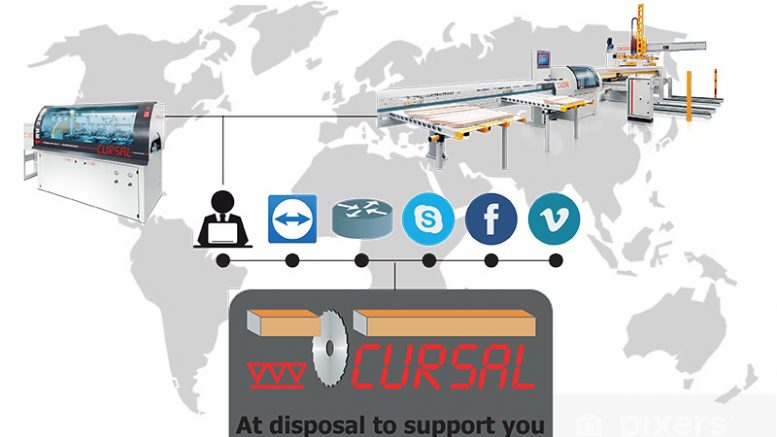 Cursal is based Trevisos’department that has become a red zone before others. Precisely for this reason, they sensitized early to the problem…

“Cursal is based Trevisos’department that has become a red zone before others. Precisely for this reason, we sensitized early to the problem and we activated a series of measures to comply with all the directives concerning the safety of our staff and outsiders who came into contact with our company. We started from the information, constantly exposing every new precautionary measure, we sanitized the air conditioning system and, twice a week, all surfaces are disinfected by qualified external companies.  Sanitization points were created with disinfectant, disposable gloves and, fortunately, we were able to obtain “FFP2 masks” which we distributed to the staff. We then staggered entries and exits to ensure the distance much beyond the meter. Differentiated baskets and other preventive measures. For outsiders we have posted regulations and entry limits, delivery obligation with masks and gloves, meetings with suppliers and consultants on site have been suspended. Having taken the necessary precautions, we therefore continued to work, both in the production department and in the offices, until the day we decided on voluntary closure prior to the decree. We did it with the awareness that the Treviso area had more and more cases and that employees are a precious asset and should also be protected by working only in an optimal and psychologically serene situation, so we left 80 percent of the workforce at home continuing until March 25th at reduced regime to organize the closure scheduled for March 26th. From that day on, the staff is at home and works via vpn in smartworking answering emails, calls, commercial requests and making remote assistance. We hope that by April 13rd we will also be able to restore production activity since we have several deliveries for the first 6 months of the year and beyond”.

“This period, being of global significance, is primarily changing the “modus operandi” of companies and the minds of companies. From small to large companies, we had to quickly reflect and act in order not to succumb to the compression of the request and offer, guaranteeing maximum service. In our case, thanks to the daily collaboration of the company’s basic employees, we are 95% active in responding to the various needs of our customers at an administrative, commercial, m and spare parts level. Internet, PC, tablet, chat, teamviewer, videoconference, are tools that we used before but which have now entered our mentality 100 percent. Families, schools, traditional companies, this is a challenge for everyone and as we have seen we were not ready. The return to normal within a short time is a utopia, there will be indelible consequences that will not slow globalization but will change its shape. We will have matured from a human point of view, we will have a more concrete and less superficial approach because, by interrupting the work routine after years, we had the opportunity to reflect and understand that nothing is certain and what is really important. We will be more rational and lucid, ready to make up for lost time and face new job challenges with greater awareness and rationality. The economic impact will clearly be worrying with economic growth scaled down everywhere. It worries that the emergency has hit the states sequentially, so when Italy will be “healed”, however, the economic slowdown of other states, where the emergency came later, will affect our economy for months. Politically, the perception we have of these European and non-European states will also radically change. This emergency has, is and will demonstrate the true nature, mentality and openness of states, warning us about what we can really expect from Europe. Brussels’ slow and clumsy moves are a clear example of how weak cohesion there is in Europe. European states have shown how strong interdependence is with China’s supplies. This China, this great power, is clearly benefiting from the current disadvantages of other countries and how does it react? With formal propaganda where it exalts itself for the help it is providing, I am still perplexed. Certainly the Asian market will starts again before us while the western states will be in difficulty for a long time, in any case we will face the effects of a de globalization”.

“We sincerely hope that this experience will help Italians to become aware of the inadequacy of the current ruling class and the need for total change at the top with qualified managers. All of us will simply have to wake up, give ourselves a long-term growth goal and understand that crises must become growth opportunities. Smartworking, teleconferences, promotional videos must not be a novelty of the moment but a normality from today, the traditional mentality of presence must be overcome. The authorities must decrease bureaucracy and facilitate resources for the country’s development, that mens research and development.
Foreseeing a short-term liquidity crisis, it would be necessary for the Government to approve a decree which obliges the Banks to provide loans, if they are guaranteed by credit consortia, with coverage of 80 percent (also made up), all in a short time ( maximum one week)”.