At the time of Coronavirus and lockdown, waiting for another wave of economic depression, talking about 2019 is like describing a different age, in a period when normality, once taken for granted, is a strong desire, but probably postponed to 2021.

Examining what happened in 2019 can help us understand what we have lost in these months of lockdown, and most of all, it reveals that last year our economy (especially the woodworking machinery business) was already showing signs of weakness. Of course, the pre-Coronavirus negative trend was not related to the events of the past two months, but it gives a valuable piece of information: the sector was already suffering and, for the future, it will take a big effort to go back to the levels of 2016-2018.

Starting from a key factor, i.e. production, the Italian industry of woodworking machinery and tools generated a value of 2,266 million euro in 2019, down by 9.9 percent from 2018. This reduction resulted from an acceptable trend in the first half, combined with the fact that most industry problems were created by German competitors, who suffered from much heavier drops. Looking at the historical 10-year chart published in these pages, it is clear that production levels have remained satisfactory and comparable with 2008, without considering inflation effects.

Of course, the trend had anticipated a worsening situation for 2020, that will be magnified by the impact of the virus on demand and supply until the end of this year.

If we look at export and domestic market separately, we see similar trends, but with different figures. Export closed down by eight percent, showing a solid trend in the traditional destination markets. Unlike Germany, Italy still benefits from a wide spectrum of export flows: this means that deep sags on specific markets can be compensated by positive trends in other markets where high consumption levels are maintained.

As to the domestic market, reduction amounted to 13.5 percent, after five years of positive trends. The entity of this reduction was influenced by the massive wave of fiscal incentives that helped many Italian companies modernize their plants in 2016-2018, with the effect of “deflating” potential demand for the years to come.

Moving to import, the downturn was even stronger, equal to 17 percent. In this case, the convergence of domestic consumption figures (domestic market plus import) indicates that a demand crisis had already started before the virus outbreak in Italy.

The trade balance, resulting from the difference between export and import, is still very high, close to 1,400 million euro. It is always important to mention this variable when we analyze our industry, as our production is characterized by strong export propensity and fits into the category of mechanical engineering, one of the sectors that most contribute to Italy’s active trade balance; this is even more important in a period when we talk about “made in Italy”, reconversion of production and reshoring offshore production back to Italy, and consequently we are forced to import at conditions that are not always favorable.

THE WORLD
Looking at export to the main destination markets, France closed with a slight increase by 5 percent, reaching a value of 110 million euro.

Within the EU, we see strong reduction in Germany (102 million euro, down by 9.3 percent), while Poland lost over 20 percent. The result in Poland was affected by the very positive trend of the past five years and a major leverage of European Union funds, which has partially saturated demand.

In Europe, the reduction of Italian technology purchase from Spain (down by 8.9 percent) and the United Kingdom (down by 13 percent) followed the overall trend of 2019. A special mention for Russia and Turkey: the former, after several years of crisis due to currency and banking issues, suffered from a 9 percent reduction, stopping at 38 million euro. The latter, after running at high levels for a few years, absorbed 11 million euro of Italian export, down by over 50 percent from 2018.

While in Africa Italian export decreased by 25 percent on the whole, the region of North America is holding on: the United States are by far the largest destination market, despite a small reduction by 5 percent, with almost 200 million euro of Italian export share.

In South America, Argentina keeps falling, losing over 50 percent (6 million euro), while Brazil is back to growth, up by 30 percent at 20 million euro. However, it should be noticed that the Brazilian market has suffered from several years of consistent decrease, touching an all-time low in 2018.

In the Middle East lost market share amounted to 14 percent, reaching a value of 33 million euro, while in the Far East the trend is largely dependent on the performance of the Chinese market.

China purchased 63 million euro of Italian technology, 17.4 percent less than in 2018. The reduction was due to increasing difficulties faced by Italian companies in their globalization process and to the improved technological expertise of local manufacturers, which reduced the number of market niches where Italian manufacturers can operate. In addition, the introduction of import duties penalized the Asian furniture industry, and consequently had a negative impact on technology demand.

Finally, Australia purchased 38 percent fewer woodworking and furniture machines from Italy, with a total value of 20 million euro. Like Poland and other countries, also in this case the negative trend is largely due to very positive results in 2018, so the year under scrutiny is basically showing a process of market value stabilization. 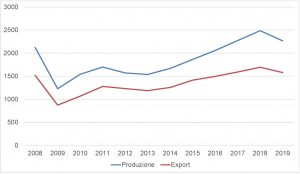