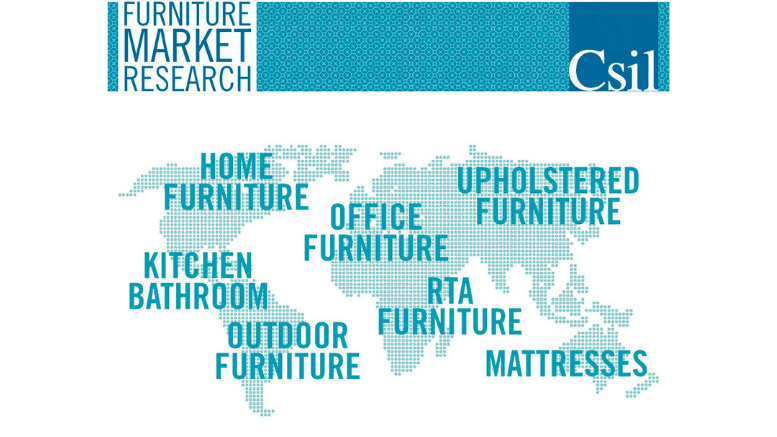 With 1.3 billion inhabitants and a per capita GNP of around US$ 1,700, the African furniture market at producer/import prices is estimated by CSIL at around US$ 10 billion. 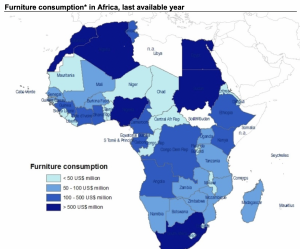 The stage of development of markets and industries varies considerably across African countries. In its constant market research activity, CSIL has recently devoted some specific attention to a selection of countries: South Africa, Algeria, Kenya, Tanzania, Rwanda and Mozambique. Some findings from the recent ‘Africa Furniture Outlook’ by CSIL are reported in this article.

North Africa accounts for around one third of total African furniture market.
Within North Africa, Algeria is the largest market. Furniture consumption is concentrated in the coastal area, where most of the Algerian population live. Algerian furniture market took advantage of the ambitious government’s state housing construction plans, that have now been partly frozen as a consequence of the declining revenues from hydrocarbon resources. Still, furniture consumption is expected to further grow in future years, in the view of operators interviewed by CSIL. 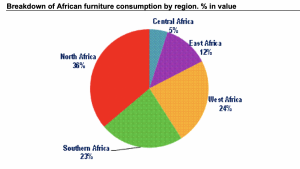 Around 60-70 percent of consumption value is satisfied by the local production. The large majority of the Algerian furniture industry is constituted craftsmen and small producers. Over the last decades the development of a modern industry has been challenged by the strong competition of importers, the virtually inexistent endowment of wood resources in the country (the furniture sector has to import most of raw materials), and a poor institutional support to the sector.  Recent changes in the government policy, including the establishment of high import tariffs, and incentives in financing industrial furniture projects, can potentially pave the way for a gradual industrial development. In the last two-three years investments in production have been made by several furniture importers, panel suppliers, construction companies, which are now among the largest furniture manufacturers in the country. Their production is expected to increase, as several of them have recently completed or are completing investments.  Among the youngest and fast developing companies are Louai, NDO, Mobis, etc.

In Southern Africa, the large and developed South African furniture market plays a relevant role. The country’s furniture consumption is estimated to be well above US$ 1 billion. Still, in the last ten years, a decrease in furniture consumption has been registered mainly because of the negative economic context resulting in decreasing demand. Imports stands at around USD 800 million, satisfying around 50% of domestic demand. The Chinese market penetration is strong and increasing. The fast increase of imports is eroding market shares of local players, in particular of small companies.

The loal furniture industry is highly fragmented as 80% of the companies in the furniture manufacturing sector are classified as micro-enterprises, which employ ten people or less.

The top players are large groups, generally vertically integrated (from raw materials production to logistics, to retails) and operating in different businesses. They supply to the market several well-known brands (both local and international) and they serve mainly large-scale organized retailers. Bravo Group, Coricraft, KAP, House of Motani and Bidvest are among the leading players.  JD Group (part of Pepkor Holdings), Lewis Group and Shoprite Holdings (OK Furniture) are among the largest furniture retailers: collectively have an estimated 45 percent share of the local market.  The high-end segment, which is a niche market, is satisfied through upper-end interior stores and/or through the architects’ channel.  Example of European companies directly operating with showrooms are Bulthaup, Franke, Schmidt Kitchens, Roche Bobois, Ligne Roset, Minotti by Limeline.

In Southern Africa region Mozambique a country endowed with rich and extensive natural resources. The furniture market is still limited in size (the main markets are Maputo, Nampula and Beira, whereas Maxixe, Xaixai, Quelimane and Tete are at the second level) but ,in a perspective, the rural-urban migration combined with the emergence of the middle class in urban areas, will potentially increase housing and furniture demand. The potential 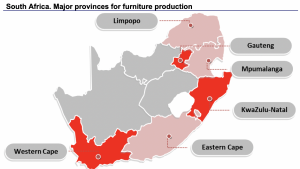 Even if Eastern Africa accounts only for slightly more than 10 percent of the total African furniture market, several economies of the area have displayed fast growth recently. 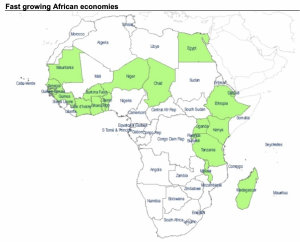 The largest furniture market is Kenya: national furniture consumption is estimated at US$ 600 million (at producer prices). The local furniture industry consists of two distinct segments: a formal furniture industry made up of  small  to medium/large firms (large firms being very few) and the Jua Kali sector which is made up of micro and small enterprises/individual workshops. The Jua Kali sector, spread all over Kenya, is characterized by the predominant use of manual tools and equipment, often resulting in less than optimal productivity and value-added. The formal sector is clustered in urban regional hubs, with the majority of the large and medium firms located in Nairobi, the Coast, and Eastern regions. Similarly to the production system, also the retail market is comparatively underdeveloped and it is estimated that only 30% of the total market is served by organized retail channels. Examples of companies active in the organized retail market include Furniture Palace and Victoria Courts. Some companies are increasingly trying to widen their product offer to be more attractive, for example including foreign brands in their product portfolio and offering services to customers.

With similar features, Tanzania displays a furniture market still underdeveloped but expected to have growth potential in the medium term. Recently, the government has boosted local production by imposing high import duties and requiring the use of local wood for government’s buildings. The informal sector is widespread in particular in the rural areas. The furniture production is concentrated in several local clusters. One of the most important is Keko, located near Chang’ombe Road in Dar es Salaam. The adverse factors as the high cost of raw materials, poor power supply, technology, infrastructure, and unfavorable taxes and levies have affected negatively the local production, leading to high production costs and consequently losing competitiveness comparing to imports. In recent years, the division between local manufacturers and importers has become blurred, as some former importers are now manufacturing locally, while some local manufacturers are importing furniture to complement what they are manufacturing in Tanzania.

Worth of notice in Eastern Africa, is also Rwanda: a country recently displaying economic growth accompanied by substantial improvements in living standards and a business-friendly environment. The country is poor in wood resources and the furniture industry is very fragmented and mainly dominated by MSMEs, cooperatives, and individuals. There aren’t large-scale industrial furniture manufacturers and the concept of modern furniture is not so developed all over the country. Still, in recent years the sector has been growing also with the support of the government which has recognized the importance of the wood business and its contribution to the national economy. Among the initiatives to support the sector, it’s worth mentioning the Made in Rwanda Policy. Per capita furniture spending in Rwanda is still low, lower than per capita furniture consumption in other Eastern African countries such as Kenya. On the other side, public investments, the booming construction sector, and an emerging and growing middle-class are potential drivers of future demand.