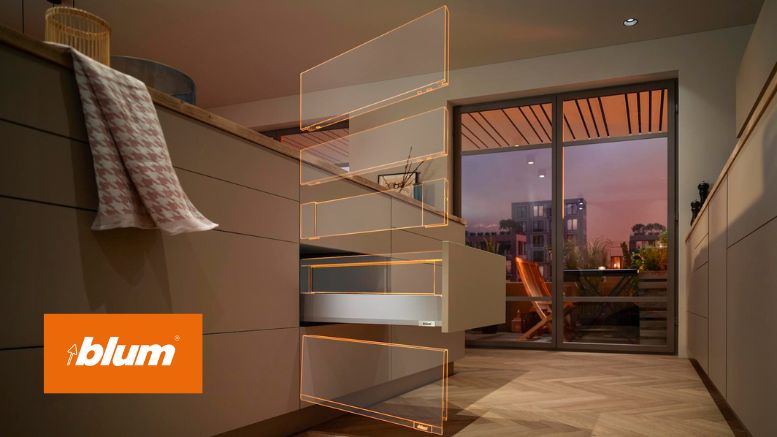 Blum‘s fiscal year 2021/2022 closes with a plus sign. The Austrian furniture and kitchen accessories giant ended the fiscal year with an 11.2 percent increase in sales and group sales of 2,643.65 million euros. This corresponds to an increase in sales of 266 million over the previous year.
“The trend of homing, living and furnishing, was also very popular with consumers last year. We see a really long-term resilient trend in the willingness to invest in a high-quality furnished home,” Philipp Blum, ceo of Julius Blum, said at the press conference. Despite all the adversities, including pandemic, material unavailability, rising costs, and war, Blum has managed to increase sales in almost all markets.

“In Europe, the markets in Germany, Italy, and Great Britain were doing very well,” Philipp Blum commented. “Despite the ongoing and very restrictive blockades in China, the Asia-Pacific region grew as a sales market for us. We feel a slowdown in Eastern Europe, partly because we have stopped our deliveries to Russia, even though we have our own subsidiary there, yet sales in Eastern Europe as a whole have increased.” In the last fiscal year, 339 million euros flowed into the expansion of production facilities, but also into regional exhibitions at the 33 subsidiaries, improved logistics centers and the like. The Vorarlberg family company made 66 percent of its investments in its home region, 34 percent internationally.

Another key word in Blum’s near future is sustainability, with a steady and progressive move away from fossil fuels. “It will not be an easy or quick transition, as there are still some steps missing,” confirmed co-ceo Martin Blum. “Yet we want to lead by example and are thinking about many things, particularly how and where we can become completely independent of Russian gas.“

There was a moment in the press conference when inflation, one of the items of most concern to the Austrian company, did. A threat on the horizon that is also likely to create backlash in the markets. “People are currently thinking carefully about what they are spending their money on,” Philipp Blum concluded. “The fragile situation of international supply chains and transport logistics, as well as strongly fluctuating commodity prices, remain a challenge.”