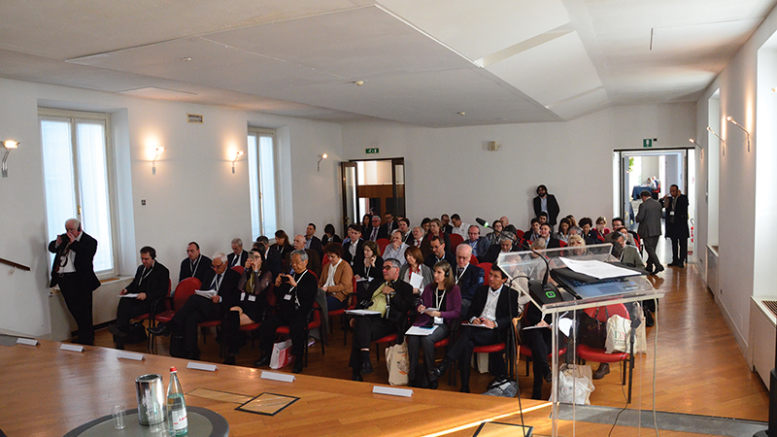 The distinctive features of next Xylexpo, scheduled next May 8-12, were illustrated to industry media from all over the world at the traditional international press conference organized in Milan every two years.

It’s a good period for the industry, as we have been writing for some time. An excellent background for an excellent Xylexpo. This is the situation depicted at the meeting with industry media, where the Acimall management and several guests illustrated their vision, commitment and projects launched for the next edition of the Milan-based biennial exhibition that is celebrating its fiftieth anniversary this year.

The first speaker was Marinella Loddo, director of the ICE office in Milan, who reaffirmed the strong collaboration between the exhibition and the agency of the Italian Ministry for Economic Development. Then the stage was taken by Lorenzo Caprio, president of Fiera Milano spa, who presented the greetings of the Milan trade fair, where Xylexpo, former Interbimall, has been hosted since its origin.

The exhibition has a strong European character, as underlined by Eumabois vice president Luigi De Vito, who attended the event in the name of president Juergen Koeppel, hit by seasonal flu. As a subject matter expert, De Vito explained what it means today to have a vision that encompasses all the key markets for the development of wood technology and furniture, marketplaces where “made in Italy” – a definition that takes up different meanings each day – always represents a core value.

Acimall and Xylexpo president Lorenzo Primultini, after formal greetings and thanks, took attending media on a tour of Xylexpo 2018, which is the expression of “a long story and intensive tradition, a long record to success and growth, with a pause of reflection during the years of the crisis, and now a second youth. Yes, I will tell you immediately that we are very happy about the next Xylexpo, as figures are positive and significant, and most of all they show a very clear picture”.

Primultini was absolutely clear: “…the market, both in Italy and worldwide, has climbed over the top and is now moving downhill. The tough recent years are almost forgotten and opportunities have multiplied. Our biennial exhibition – the only industry event in Italy, supported by Eumabois, the Italian Ministry of Economic Development and Cfi-Comitato Fiere Industria of Confindustria – has a peculiarity, i.e. it is organized by an industry association, Acimall, which represents industry companies. It’s a non-profit association on a mission to invest its experience and expertise in the definition of a real “marketplace” where demand and supply can meet effectively, an international showcase, a global review where the Italian industry is in the forefront, but together with all the most important players from several countries around the world”.

“Fifty years of history, fifty years of changes, commitment, vitality, which have resulted into a 2016 edition hosting 441 exhibitors on a net exhibition area just above 29 thousand square meters, visited by 17,145 operators (with 41 thousand accesses in total), 29.1 percent from abroad”, Primultini added. How many will be there in May? We are quite optimistic, as we believe that this “virtuous circle” will keep generating positive effects: the current status of registrations is clear and shows a good trend. Until January 16 we finalized the participation of 300 companies for a total net surface of 30,000 square meters, compared to the final result of 29,400 square meters in 2016.

Consequently, we decided to add a fourth hall, as communicated by our press office a few weeks ago, to meet increasing demand by many exhibitors, not only big groups, but also small and medium businesses.

As a result, we will adjust the distribution of product categories and place market leaders in each hall: in hall 1 there will be Biesse Group and Barberan, in hall 2 Scm Group, in hall 3 Homag Gorup and Cefla, in hall 4 Weinig and Ima Group.

Primultini then reminded that entrance will be free for all operators preregistering on www.xylexpo.com, while unregistered visitors will have to pay a 15 euro ticket.

The Acimall and Xylexpo president also announced the third edition of “Xylexpo Award”, the prize for innovation. Another initiative presented by Primultini was Xylexpo Arena in hall 4, a “conference room” inside the exhibition, launched in 2010.

Primultini closed his speech saying thank you to the sponsors (Leuco, Salvador, Homag Group, Biesse Group, Leitz, Giardina Group, Weinig, Metal World, Scm Group, Greda, Costa Levigatrici and Finiture) who had their booths at Palazzo Giureconsulti to meet over forty journalists and tell about their news at Xylexpo 2018.

Then the word went to Dario Corbetta in his double role as exhibition manager and Acimall director.

“My first comment – Corbetta said – is about visitors, we have been recording growing figures in the past three editions (plus 7.1 percent in 2014, plus 14.2 percent in 2016) and we expect to maintain this double-digit growth trend also this year. The efforts to reposition Xylexpo, combined with an improving economic scenario, have generated a virtuous circle with a clear outline: a quality exhibition focused on secondary operations, capable of involving “big customers” from the global retail and distribution business.

Figures indicate that we are the reference exhibition in Europe in even-numbered years: 71 percent of foreign visitors come from the Old Continent, 20 percent from Asia and Oceania, 6 percent from the Americas”.

“An event – Corbetta added – that is celebrating its 50th anniversary and is an excellent showcase for industry players willing to operate in the Italian market and to compare all the options offered by the technology portfolios of the world’s leading vendors.

Corbetta then presented a rich set of figures, as the global economic situation inevitably has an impact on any activity, including Xylexpo: in recent years, global production has been growing by 3 percent annually, while European economy is substantially stable (plus 1.8 percent in 2018). In the past few years, Italian gross domestic product has been growing too, although a slight reversal is expected in 2018 (plus 1.2 percent versus 1.5 percent in the year just closed).

Another element to be factored in for macroeconomic analysis is Italy’s strong vocation to export in all industrial and economic segments, evidence of the technical and technological resources and expertise of Italian companies.

The Acimall and Xylexpo director finally concluded: “Looking specifically at the wood technology industry, I would like to stress that the core businesses of Italian industry are the secondary processing of panels and finishing technology. The woodworking technology industry in Italy is comprised of 250 companies, 150 of them Acimall members; 9 thousand employees generating revenues back above 2 billion euro, with a 75 percent export share.

This situation, at least for Italy, is corroborated by the results achieved in 2017: preliminary balance figures indicate that the Italian woodworking machinery industry reached a production value of 2.29 billion euro, up by 11.6 percent from the previous year. Excellent results for export, growing by 7.1 percent to achieve a total value of 1.6 billion euro. Talking about export, it is worth stressing that Italy’s top customers are the United States (165.5 million euro), followed by Germany (105.8 million), Poland (102.4 million) and France (92.5 million).

Also import increased by 10 percent (199 million euro) with a strongly positive trend in the domestic market (695 million euro, plus 13 percent versus 2016), with expectations of further growth in the short and medium term for the reasons we mentioned before:

The press conference was closed by Federico Rossi, professor at the London South Bank University where he has founded and runs DARLAB: according to tradition, the Xylexpo presentation featured a “testimonial” to talk about a “hot topic”. This year the topic could only be the “Smart Factory” in its entirety, from engineering to product.