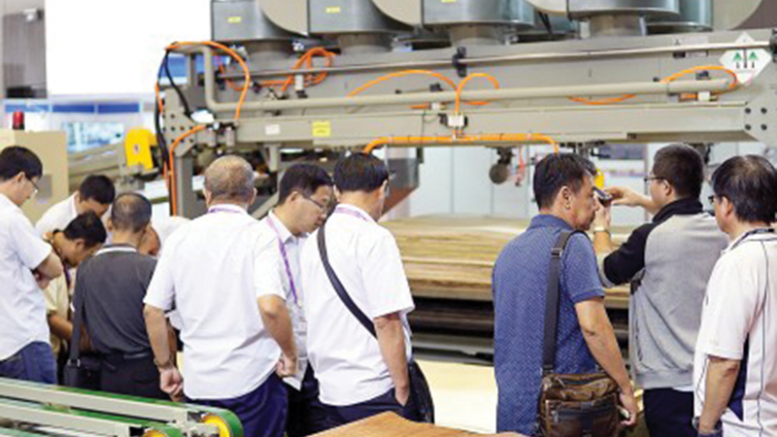 Deutsche Messe is further expanding its portfolio of international shows by joining forces with Indonesia’s leading event for woodworking machinery and components, the Ifmac show in Jakarta. Launched in 2012, it is held in parallel with Woodmac every autumn at the Jakarta International Expo Kemayoran exhibition center and is organized by the Indonesian tradeshow company Wakeni (PT. Wahana Kemalaniaga Makmur). Ifmac is supported by the Ministry of Industry of the Republic of Indonesia and by several local and international industry associations, including the European Federation of Woodworking Machinery Manufacturers (Eumabois). It also features a regular German country pavilion operated by the German Woodworking Machinery Manufacturers’ Association (Vdma Holzbearbeitungsmaschinen), a co-organizer of the Ligna show in Hannover. The 8th edition of Ifmac held this year is the first time that Deutsche Messe and Wakeni are joining forces (9 to 12 October).
Deutsche Messe Managing Board member Andreas Gruchow: “The venture with Ifmac has major potential and positions us in a prospering market in Southeast Asia. In Indonesia, demand for efficiency-enhancing solutions, high-performance woodworking machines and modern accessories is very strong. The Ifmac show is therefore the perfect platform for local firms seeking to learn about the latest developments in woodworking technology and explore their capital purchasing options“.

The Indonesian government has set itself the goal of moving Indonesia up into the ranks of the world’s Top 10 economies by 2030. Indonesia has a very strong furniture industry that is an important player in the local wood working market, particularly regarding the sustainability of primary wood production. However, its production machinery tends to be outmoded and in need of replacement with new, more efficient equipment. Gruchow: “The time has come for Indonesia’s furniture industry to invest in cutting-edge technology capable of fueling growth“.

Indonesia is the world’s third-largest democracy and the largest economy in the Asean region, with an annual Gdp growth rate of more than five percent. “Indonesia’s rapid urban population expansion is fueling massive growth in the construction sector, which in turn is driving demand for prefabricated timber components and interior furnishings. The market is therefore ripe for a trade show specializing in woodworking machinery,” asserted Gruchow.

With some 56 million hectares of commercial forest, Indonesia is one of the world’s biggest producers of timber and exporters of timber products. To put that in perspective, Germany’s total forest area is 11.4 million hectares. Indonesia is also the world’s fifth largest furniture exporter. Its domestic demand for furniture is likewise increasing – in qualitative as well as quantitative terms – on the back of consumer spending and growth in the construction and hotel sectors.

The Indonesian furniture industry will continue to expand to keep pace with global competition. Rini Sumardi, Director of Wakeni, is delighted with the cooperation with Deutsche Messe and sees great opportunities for expanding the international scope of Ifmac: “Ifmac is Southeast Asia’s one-stop event, focusing on machinery and technological needs for the expanding furniture industry in the region. Now that Ifmac is part of Deutsche Messe’s Woodworking Shows Worldwide, Ifmac is set towards becoming a truly global trading platform“.

Last year’s Ifmac featured over 300 exhibitors from 23 countries, and attracted more than 13,000 visitors from 37 different nations. The organizers are expecting a similarly strong international presence at this year’s show in October. As part of the show’s international exhibitor lineup, the People’s Republic of China will be staging a national pavilion. Organized in partnership with the China National Forestry Machinery Association, the pavilion will span a space of over 600 square meters.