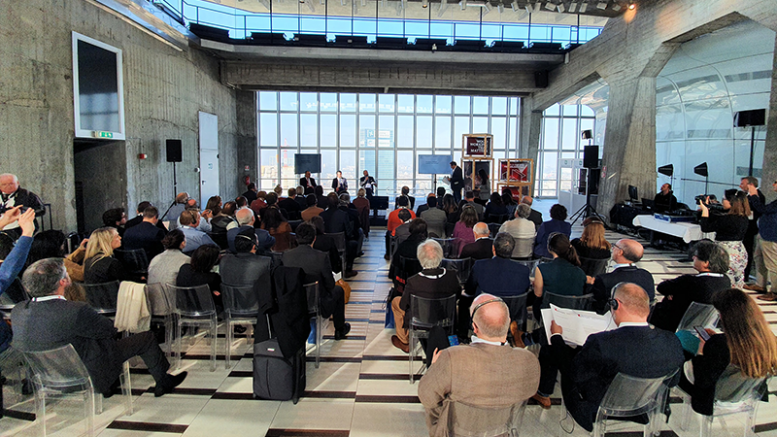 On February 18, Milan hosted the traditional international press conference introducing next Xylexpo, the biennial international exhibition of woodworking technology and furniture industry supplies to be held from 26 to 29 May 2020 at the FieraMilano-Rho expo center.

The location was the Enzo Jannacci Auditorium, on the 31st floor of the Pirelli skyscraper designed by the world-famous architect and designer Giò Ponti, to celebrate the 40th anniversary of his death on September 16, 1979 and the 60th anniversary of the tower inauguration.

The agenda opened with an interesting roundtable discussion involving Paolo Borgio of Fiera Milano, Massimo Goldoni, president of the committee that gathers all the exhibitions organized by Confindustria member associations, and Luigi De Vito, vice president of Eumabois, the European federation of Acimall’s “peer” associations. The three speakers offered different points of view on the exhibition, but most of all about the topic that dominated the first part of the press conference, namely an open conversation about the role of an exhibition in an increasingly digital economic and social context. The outcome was a strong endorsement to the value of high-quality exhibitions which offer the opportunity – in a world that offers more and more digital opportunities – to meet, look into each other’s eyes and shake hands.

Then Lorenzo Primultini (*), president of Acimall and Xylexpo, took the stage to thank all participants and sponsors (Aimsad, Bacci, Biesse, Big on Dry, Dalso, Fimal, Giardina Group, Greda, Homag, Incomac, Leuco, Metal World, Salvamac, Scm Group, Vitap and Weinig) and went straight to the topic of the day, illustrating the factors of uncertainty that are characterizing this period – Brexit, Corona Virus and increasing international conflicts – and possible short and medium term effects.

Primultini stated that “…Xylexpo is organized by Acimall, a no-profit industrial association whose mission is to support the industry, create business opportunities for Italian companies and for organizations from all over the world, coming here to face the challenge of the demanding but rewarding Italian market”.

And he added: “What do we expect? A successful edition, for sure, that will reflect the market situation as usual. The 2018 edition closed with 37 thousand visits by 17,781 industry operators, 2.1 percent more than in 2016. Among them, 5,032 international visitors, 28.3 percent of total attendance. This year we expect to achieve the following figures: until January 30, 2020, 330 companies have registered at Xylexpo, with a 30 percent share of international companies, covering a total net surface of 29 thousand square meters. This year, Xylexpo will occupy three halls, so as to ensure regular visitor flows to all exhibitors, as far as possible. More generally, I can anticipate that we will keep the same layout of recent editions, placing one or more big players in each hall: Biesse Group and Ima Schelling Group in hall 1, Scm Group and Weinig Group in hall 2, Homag Group, Felder Group, Cefla and Giardina Finishing Group in hall 3, just to mention a few”.

Primultini then confirmed access conditions for visitors (a ticket will cost 15 euro, but free access will be granted to operators who pre-register on www.xylexpo.com), and reminded that the exhibition in May will host the fourth edition of “Xylexpo Awards”, this year with three categories: “Wood and Panel Processing” (including tools), “Finishing and Coating” (equipment and materials) and for the first time “IoT and industrial process management”.

Primultini then passed the mike on to Andrea Giavon, director of Catas, the most important European laboratory for wood-furniture testing and certification. Xylexpo has closed a strong partnership with Catas to organize important meetings and initiatives on the critical topic of education and training. Giavon, after presenting the organization he leads, said taht “… spreading knowledge has always been a mission pursued by Catas with great attention and commitment, and such activity will be further strengthened in 2020 through the collaboration with Xylexpo”, starting with a census of all training opportunities available in Italy, offered by organizations and institutes that, starting from the 2020 edition, will be increasingly involved in Xylexpo.

Giavon introduced three conferences that will be the “core” of the agenda: on Wednesday, May 27, the Xylexpo Arena will host the second edition of the technical seminar “Next Wood – Designing future surfaces together” – organized by Catas, Poliefun-Politecnico di Milano, Anver and Acimall – dedicated to the “response of coating and plant manufacturers to the increasingly tough challenge of coating materials”. On Thursday, May 28,  Xylexpo will sponsor the event “Adhesives in the furniture industry and current product and process developments”, created by Catas and Federchimica. Topics will include the application of veneer in compliance with new German formaldehyde regulations, the use of hotmelt glues for the application of glossy coatings, the use of polyurethane glues with low free isocyanate content, and new water-resistant vinyl glues. On Friday, May 29, the discussion will focus on VOCs, volatile organic compounds, a source of indoor pollution, starting from the stricter and stricter regulations on formaldehyde emissions that, unfortunately, are not shared and coordinated on a global scale, forcing producers and processors to very complicated management practices.

The next on stage was Dario Corbetta, Acimall director, who added some remarks about the decision to set up the 2020 edition in three halls, “…a decision driven by the economic uncertainty that has been characterizing the final months of 2019 and the beginning of 2020. Many actors and players showed a pessimistic vision that has not been confirmed by facts, so that the largest majority of exhibitors has actually maintained the same area as in past editions. But still, we had to work to squeeze all requests into more constrained space, covering only three halls, and even narrowing down the aisles to the limits prescribed by safety regulations”.

Corbetta then dealt with an awaited topic, namely the potential impact of “Chinese epidemics” on global economy. “China plays a leading role in woodworking machinery – Corbetta said – it’s the world’s third-largest manufacturer behind Germany and Italy. As to trade relations, Italy and Europe are more focused on domestic and continental business, plus the fact that the first destination market is the United States. Don’t forget that Xylexpo is basically a Euro-centric exhibition (70 percent of international visitors come from Europe), so we don’t expect significant effects from the “Corona Virus”; also because the exhibition is planned in three months from now and, if the situation has not solved or the general alarm has not vanished until then, we will have much more serious things to worry about…”

The Acimall and exhibition director’s speech closed with an analysis of visitor flows in the past two editions (plus 2.1 percent in 2018), a trend that is expected to be confirmed this year, in a global economic scenario characterized by serious political instability. “However, on a global level, data still show a world GDP growth by 3 percent, while the Euro region stops at a mere 1.3 percent.

The two economies of wood technology, Germany and Italy, closed 2019 with disappointing results: Germany grew by 0.5 percent only, while Italy scored zero, the worst result since the crisis.

A positive element for Italy is the extension of most facilitations and loans for Industry 4.0. This means that Xylexpo will take place in a very favorable season for investments, a situation that all exhibitors in Milan will certainly leverage”.

(*) President Primultini was unable to be present for last minute commitments and the contents of his speech were told to those present by Luca Rossetti and the director Dario Corbetta.