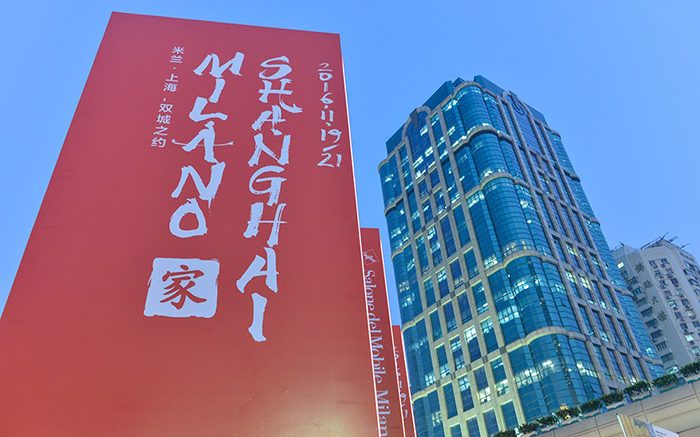 The second edition of the Salone del Mobile.Milano Shanghai, which showcased the very best Made in Italy furnishing and design at the SEC – Shanghai Exhibition Centre – ended with an overwhelming sense of satisfaction and optimism. The strong presence of selected professionals from China’s first tier regions – Shanghai, Beijing and Guangdong, along with other regions currently experiencing strong growth – such as Sichuan, Fujian, Shandong, Henan and Hubei – was confirmation of the power of Made in Italy to attract the greatest and fastest-growing market in the world.
Claudio Luti, President of the Salone del Mobile, had this to say: “We are extremely pleased with the outcome of this second Shanghai event, which has again underscored the validity of a decision we really believe in and in which we have invested hugely. We put a great deal of effort into honing our visitor profile, selling all the 20,000 tickets we made available to very prominent professionals, which will help ensure that we penetrate the Chinese market to the best of our abilities. We focused essentially on the quality of the people who wanted to join us rather than on numbers, and on building a solid relationship basis”.
“The success of this edition is a measure of just how the excellence and creativity of our companies are steadily achieving consensus among Chinese consumers, who set increasing store by quality and authenticity. The people driving Made in Italy – now represented by the 109 brands – are clearly now keen to dip a toe into the Chinese market and respond to its challenges. The development potential is promising. What we now need to do is work on gaining consumer confidence, identify the appropriate sectors and channels and position ourselves in the market with a well-defined and strong identity”, he continued.
The many positive responses received by the companies from the public and stakeholders alike serve to confirm that the Salone del Mobile.Milano’s strategy – to showcase the very best of Italian manufacturing and to create a major event with substantial cultural content, that reflects the Italian lifestyle – is the best way to build a mutually-beneficial commercial and cultural bridge between Milan and Shanghai.
The Italian system gave out a strong signal of unity and synergy, evidencing the country’s excellence in all sectors, from design itself to the art of design, enabling the Italian brands to dialogue brilliantly with a constantly evolving market. The event thus reaffirmed its position as the perfect meeting point for an increasing number of Chinese consumers who dream of Italy, love Italian taste, creativity, quality of life and products and the style, innovation and craftsmanship of the furniture and design companies that see China as a market ripe for expansion.
“The huge success of the second edition of the Salone del Mobile.Milano Shanghai is testament to Italy’s key part in selling furnishings in China. Italy is the country’s leading supplier, holding an 18 percent share of China’s overall furnishing imports. An extraordinary result – bolstered by the increasingly strong interaction between Federlegno Arredo Eventi, the Italian Trade Agency Ice and the exhibitors – that drives us to invest in this extraordinary country with increasing conviction”, said Emanuele Orsini, President of Federlegno Arredo Eventi.
This year also marked the second edition of SaloneSatellite Shanghai, which drew in no less than 50 young Chinese designers, proving that China is a thriving hotbed of opportunities, research, ideas and experimentation. The award-winners will be invited to the next edition of SaloneSatellite, under the umbrella of the Salone del Mobile.Milano, from 17th to 22nd April 2018.
The three Master Classes were fascinating and packed, providing an opportunity for reflection and discussion on design issues, led by prominent figures in the world of Italian architecture and design – Mario Bellini, Piero Lissoni and Giancarlo Tintori – and three equally brilliant Chinese designers– Di Zhang, Kuang Ming (Ray) Chou and Jamy Yang. The debates organised by the Salone del Mobile.Milano Shanghai media partners were no less compelling and crowded, as was the exhibition Italian Interiors from 1925 to the Present Day, demonstrating that China is increasingly attracted by and interested in Italian culture.
Again this year, the full collaboration of the government, the Ministry for Economic Development, in the person of UnderSecretary Ivan Scalfarotto, the Italian Trade Agency Ice, the Italian Embassy in Beijing and the Italian Ambassador to the People’s Republic of China Ettore Sequi and the leading Italian institutions in China has been crucial in bringing the event to fruition, right from the outset.

The next Salone del Mobile.Milano Shanghai will be in November 2018.