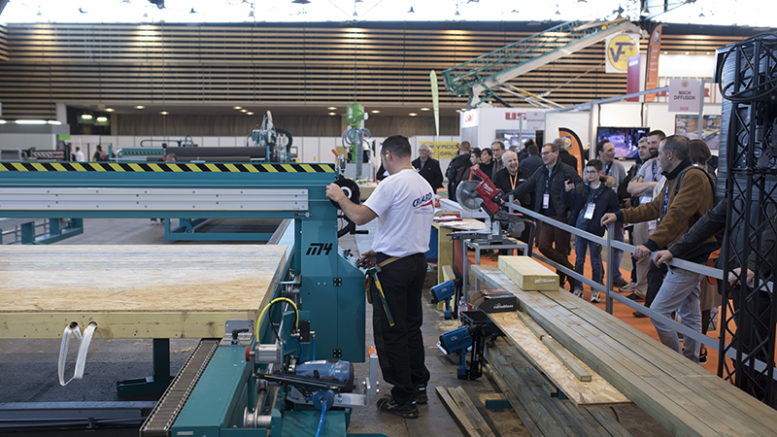 The timber, woodworking machinery, and fitting out trade show took place on 4th–7th February this year.  It’s a precious, fulfilling moment, which every two years reveals the market temperature and gives stakeholders in all branches of the sector the chance to get together, exhibit their latest technology, and help their business flourish. In the aisles, on the stands, around the activities, on the social networks— everywhere you looked, the talk and the messages were positive. The outcome of these 4 days is therefore positive with 29,100 professional visitors, 420 exhibitors—a third of them from abroad—and a growing representation from fitting-out and first-stage timber conversion, Eurobois asserts its status of leader and becomes the benchmark national event in timber & woodworking and the go-to gathering for professionals in the sector.

Firmly rooted in a buoyant region, the trade show enjoyed nationwide outreach, with over 45 percent of visitors from regions outside Auvergne Rhône-Alpes representing a 35 percent increase in that segment.

That wasn’t this year’s only success: there was a huge progression in the number of fitting-out professionals (three times the 2018 number) and almost as big an increase in the number of visitors from first stage timber conversion (twice the 2018 turnout).

These positive figures vindicate this year’s big expansion in the fitting-out and first stage conversion offerings. In these two flagship sectors, the number of exhibitors soared and the solutions on offer were ever newer and ever more extensive. Fitters-out and sawyers were thus able to find all the products, services, and equipment at this year’s Eurobois that they need for their future projects. They were also able to update their knowledge and meet and trade thoughts with others thanks to dedicated features and highlights organized by the main institutions and representative federations. The French timber federation, Fédération Nationale du Bois, organized dedicated workshops and held its General Meeting attended by 220 sawmill operators. France’s fitting-out and furnishing association, Chambre Française de l’Agencement and l’Ameublement Français, took part in many conferences on the TV stage and played a big part in organizing dedicated features, including Fabrik Eurobois.