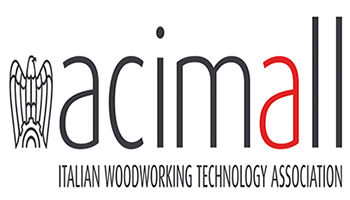 The general assembly of Acimall, the association of Italian woodworking machinery and tools manufacturers, has elected the new Board of Directors: president Lorenzo Primultini (Primultini) and vice presidents Raphaël Prati (Biesse) and Luigi De Vito (Scm) – whose terms will be renewed next year – are now supported by Marianna Daschini (Greda) and Umberto Pizzi (Pgs), whose term as board members was extended by the assembly, and the newly elected members Filippo Pellitteri (Twt) and Franco Tanzini (Vitap). The fifth elected member was Giovanni Sedino, currently serving as Treasurer, who will join the board next year, when a new president and one vice president will be nominated. This “two-stage approach” for the election of the board was adopted in recent years to ensure continuity in the management of the association, introducing a 12-month interval between the election of members and the election of president and vice presidents. The board will be comprised of seven members in total, so that the Acimall governance is even more agile and effective.
“It’s been a very peaceful and constructive assembly”, commented president Primultini at the end of the activities, carried out last June 28 in Desenzano sul Garda (Verona). “The high attendance of members and the collaborative mood indicate that the industry is ready to look ahead together, knowing that only the joint commitment to share tasks and projects can keep “made in Italy” woodworking technology in the forefront, which has always been one of the most significant items in our trade balance”.
The day opened with an extensive presentation by Andrea Bianchi, industrial policy manager of Confindustria, who offered an overview of Italy’s key economic topics, stressing the importance of the manufacturing business, the essential role of technology suppliers in a strong economy, and the relationship between industry and government. Bianchi’s participation reaffirmed the close collaboration between Acimall and the industrial association based in Viale dell’Astronomia in Rome.
The agenda continued with the president’s and the treasurer’s speeches, approved with a unanimous vote, followed by a ceremony to present a memorial plaque to the companies that have been Acimall members for over fifty years; these include Centauro, Cosmec Technology, Scm, Steton and Vitap, which joined Acimall on June 12, 1967! On stage, in decreasing order of “seniority”, there were also Bacci, Corali, Locatelli Macchine (Acimall members since January 15, 1968), Stark (March 24, 1969), Imeas and Omas (June 12, 1969).